The standard offers £15,000 levy funding and would be suitable for any company with an office in England. The exact amount of levy funding available depends on the size of the company: 3 million or more income – 100% levy funding; over 50 employees – 95% funding.

The apprentice must have the right to work in England, be of 18 years old, obtain ENG and have Level 2 English and Math (GSCE 4-9). Candidates not meeting English and Math requirements will need to undertake Functional Skills and work towards qualifications prior to End Point Assessment.

The programme will be delivered will be delivered in the form of two pathways: new starters route (up to 36 months including 12 months of seagoing service and End Point Assessment) and experienced seafarers route (underpinning knowledge only). FNCs intention is to design a contemporary study package with one set of practical units delivered on campus and a second set of units delivered via blended learning. Underpinning knowledge are developed as a part of Level 3 Diploma in Maritime Studies: Officer of the Watch on Merchant Vessels of less than 500 gross tonnage (Near Coastal) and further enhanced with competencies developed as a part of STCW certification. Students will complete MCA external examination (orals and written) and result in attaining STCW II/3 certification.

Members are invited to view the course overview and timetable attached, along with a simple skills scan document for completion for candidate registration. FNC intend to initiate the programme firstly for experienced seafarers with a May 2022 intake, and hold another intake in October/November for new joiners.

Expressions of Interest are requested to FNC to enrol candidates on both courses. The route has been hard fought and gained by the small vessels sector and Members are encouraged to consider their training programme and take on candidates where they can.

Expressions of Interest should be directed to Alina Prylipko, alina.prylipko@blackpool.ac.uk, Curriculum Manager.

The Trailblazer group which worked on the proposals was chaired by Jon Hawkins of Boluda Towage and BTA Technical Chairman, with membership covering tug, workboat, fishing, Royal Navy, superyacht and other interests, and support from both the MCA and colleges. The group is very grateful to Diane Wilford of the Institute who guided the proposal to approval at the first time of asking.

The apprenticeship will be four years long for someone starting from scratch, and taking into account sea time, but most apprentices are likely to have some experience, which would be taken into account when designing their programmes.

Full details will be published on the IfA website soon, with queries otherwise invited to Robert Merrylees. This new apprenticeship is for England only; arrangements are different across the UK, and if there is sufficient demand in Scotland (or, probably less likely elsewhere in the UK), it is possible to create equivalent apprenticeships there too.

The Trailblazer Group established to oversee creation of a Master 500GT NC apprenticeship, chaired by David Carter RN, with membership including tugs, workboats, yachts, and Border Force, is aiming to make its initial submission to the Institute for its 11 May deadline. This submission is effectively a ‘permit to work’, formally authorising the group to start work.

Members with an interest in the apprenticeship are invited to contact Robert Merrylees, rmerrylees@ukchamberofshipping.com for more information and interest in joining the Trailblazer Group. 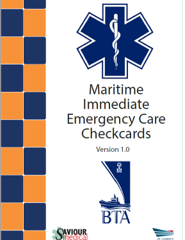 The British Tugowners Association (BTA) is pleased to offer to its members and the wider maritime community a series of Maritime Immediate Emergency Care Checkcards for enhanced immediate response and care on board vessels. The BTA, in Read more… 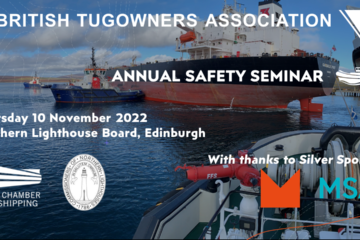 The 2022 BTA Annual Safety Seminar, held 10 November at the Northern Lighthouse Board, Edinburgh, sought to share innovative ideas and drive progress regarding safety in the towage industry, focussing on establishing improved equipment and Read more…

In a series of interviews with members and associate members, we will be publishing information regarding the businesses and people that make up the BTA. Our first interview is with Wencke Boerrigter from Polestar Publishing. Read more…